The 7 most frequently asked questions about Mahjong Solitaire 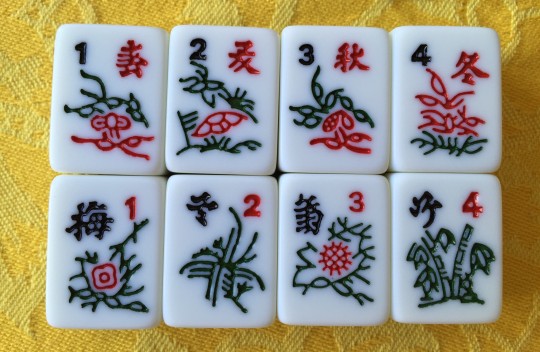 Despite being one of the most popular digital pairing games in the world, there are still many Mahjong Solitaire players who do not know much about the game itself. Its simple gameplay that allows anyone to quickly understand its dynamics and begin to play right away is probably to blame for this lack of knowledge. But for those who wish to learn more about it, we compiled a list of the 7 most frequently asked questions about Mahjong Solitaire that will give you a fresh and new insight into this great pastime.

1. Is there more than one type of Mahjong?

Yes. There are two main types of Mahjong, the traditional version, and the Solitaire version, but within the former, there are several variations.

The name Mahjong alone is normally used to refer to a Chinese game, created during the Qing dynasty. It is commonly played by 4 players and the goal is to draw and discard the tiles to build a winning hand made of sets of specific symbols. Even within China, there are many local variations to the game. The most commonly played variation is the Hong Kong one, with the remaining ones taking up the name of the city they come from.

As the game spread in popularity in Asia and worldwide, other variants started to appear, such as the Japanese, the Korean and the Thai Mahjong, and so on. Each variant has its own set of special rules, scoring system, and the number of tiles employed may also differ.

As for the Mahjong Solitaire, the game can also present slight variations, but these are usually related to special features such as the possibility or not of undoing moves, using hints, or changing the symbols of the tiles.

2. What are the differences between Mahjong Solitaire and the traditional game?

There are plenty of differences between the two because they are completely different games. In fact, the only point in common between them is the use of the same symbols for the tiles.

The Mahjong Solitaire is a simple one-player pairing game. Each game starts with a board in which the tiles are positioned in a certain disposition and the players have simply to pair the tiles by matching their symbols to remove them from the board. The players win when there are no more tiles left on the board.

The rules of the traditional Mahjong are much more complex. For starters, it is normally played by four players. There are many variations within the traditional game itself, but in most of them, each player receives 13 tiles and must then discard, draw and even rob tiles from other players. The goal is to build a “winning hand” made of melds (sets of identical tiles).

As you can see, the two games are drastically different both in their gameplay and final goal.

3. What is the origin of Mahjong Solitaire?

The pairing game we know today was created by Brodie Lockard in 1981, inspired by a traditional Chinese game called “The Turtle”. Since it used the same tiles and symbols of the original Mahjong, it was named Mah-Jongg.
In 1986, the same Lockard helped Activision create a paid game version called Shanghai for Macintosh, which was a success worldwide.

As the game grew in popularity, it did not take long for clones to appear. As the name Shanghai was patented, these clones were released under different names such as Taipei, Kyodai, and Shanghai Solitaire, among many others.

Eventually, because of the drawings of the tiles, the name Mahjong Solitaire (to emphasize its one-player quality) began to be used as a generic name for this type of game.

4. Do the symbols in the tiles have a meaning?

Yes, they do, at least in the traditional Chinese game. In this, the symbols are divided according to their meaning and, in many variations, each set may have different rules associated with them.

The traditional tiles are divided as follows:

Roped coins: 9 tiles with the symbol of ancient coins roped together. These tiles are known in the West as bamboos.

Coins: 9 tiles with the symbol of individual ancient Chinese coins. In the West, these tiles are usually referred to as circles or dots.

Winds: 4 tiles, each with the character representing a cardinal point.

Dragons (Western designation): a set of 3 Honor tiles. Two of them bear the symbol for “Center” and “Get Rich”, while the third can be displayed as a white tile or with a simple frame.

Flowers: a set of 4 special tiles bearing the drawing of flowers, traditionally the Plum, Orchid, Chrysanthemum, and Bamboo.

Seasons: also a set of 4 special tiles, each with a flower representing the 4 seasons of the year.

It is important to note that despite borrowing its tiles from the traditional game, in the Mahjong Solitaire the meaning of the tiles is irrelevant, which is why some games give players the chance to change the symbols they are playing with.

5. Is there a point system in Mahjong Solitaire?

Yes and no. There is no scoring system related to the tiles, but some games may award players a certain number of points depending on the time they take to solve a puzzle. In these cases, the quicker you clear the board, the higher your reward.

Some games may also introduce penalties if you use special features such as the Undo or Hint options, increasing your overall time in the end, thus reducing your points.

6. Are all Mahjong Solitaire games winnable?

It depends on how the game was generated.

American programmers tend to use a random algorithm when creating the puzzles, which means that there may be some boards that turn out unsolvable.

However, the great majority of digital games (be it online or not) are designed to have at least one possible solution. This means that, if you end up with an unsolvable board (the last pair of tiles is on top of each other), it is more likely that the reason lies behind a mistake rather than it being an unsolvable puzzle.

Yes. The difficulty level is set according to the number of winning paths available. The more there are, the easier the game, while the hardest games are the ones with one single path available.

As expected, when the number of winning paths is reduced you are more likely to find yourself in situations where there are no more moves available and in which you either have to undo some movements to try a different route or forfeit the game. The harder the game, the more you need to strategize and plan your moves carefully.

9 Mahjong tips to master the game

Play our other online games!